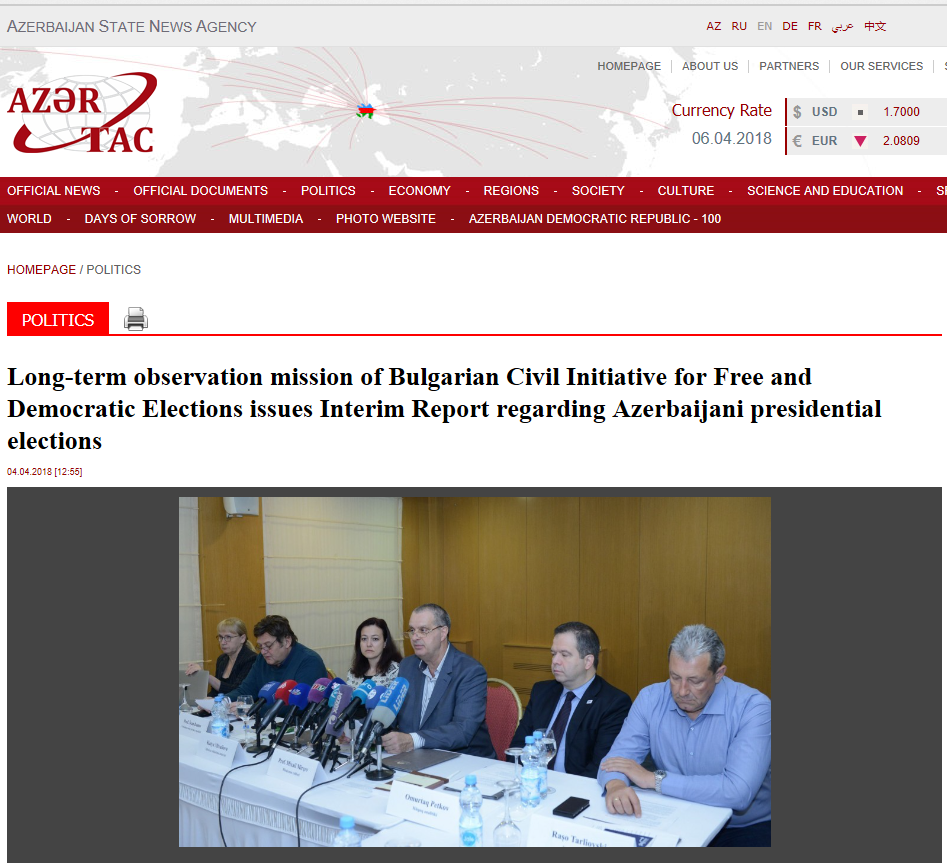 Civil Initiative for Free and Democratic Elections (GISDI), an NGO, invited by the Central Election Commission to observe the Presidential Elections to be held on 11 April 2018, recently issued its Interim Report.

In its report, GISDI long-term observation mission assesses the current geopolitical situation as the case necessitating holding early Presidential elections on 11 April 2018; highlights the compliance of election observation with the international standards for democratic and fair elections; considers the political, economic and cultural features of Azerbaijan; assesses pre-election situation and legal framework for the conduct of elections; comments on candidate nomination and registration, election campaign, its media coverage and etc.

The report notes that 15 candidates were nominated for the presidential elections and their applications were submitted to the Central Election Commission (CEC). 8 out of them were registered by the CEC. It underlines that “all candidates and party representatives that GISDI mission met shared with them that they have not experienced any problem with the registration of their candidacy. They could hardly point anything that could hinder their campaign.”

The report highlights that “most of the registered political parties with few exceptions have expressed their will to participate in the Presidential Elections”.

The report analyses the results of sociological surveys carried out by various organisations ahead of the elections. Reffering to the results of these surveys, authors of the report highlight that most of the respondents rated socio-political situation in Azerbaijan as stable, and support policy carried out by the President of Azerbaijan. They note that in all surveys the rating of the incumbent President is high and that the respondents will support him in the election.”

The report explains “with expert opinions the reasons why two traditional opposition boycotters and their satellite organizations refused to nominate” and states that “main reason is related to the lack of chance of their candidates to compete with the main candidate.”

Assessing the current legal framework for conducting the election, GISDI reminds that “the Election Code was adopted in May 2003 as a result of intense communication and collaboration with the Venice Commission of the Council of Europe, OSCE/ODIHR, and International Foundation of Electoral Systems (IFES).”

The issues of voter education and empowerment are broadly covered in GISDI report. The report says that CEC has conducted a set of different projects with the aim to rise voters’ education and empower them to make informative choice and exercise their civil right to vote. It is also noted that CEC has prepared and distributed a number of printed materials, radio and TV programs, broadcasted by the public service and private media once a week. There are also several educational short videos published on YouTube and other social media.
Печат